Last night the first public election debate was on live television. Fortunately RTL offered a livestream of the debate on their website for those of us who don’t own a tv. The debate itself was almost unbearable to watch with politicians constantly interrupting each other and throwing corny oneliners at each other. The #rtldebat became a trending topic on Twitter as well as two of the participating politicians: Rutte and Wilders.

As I’ve previously told, Twitter has increased my engagement with politics since I no longer own a tv. Backchannels on Twitter during live events or live debates in the Netherlands are very active and contain a nice balance between commentary, humor and cynicism. And last night it included commentary of politicians who weren’t invited to this particular debate.

The debate from last night was filled with tons of clichÃ©sÂ and one-liners and was hard to watch without either the power of relativity, humor or cynicism.Â That’s why I came up with the bullshit bingo consisting of all those worn-out one-liners. I tweeted the picture during the end of the debate and it became a trending picture on Mobypicture. 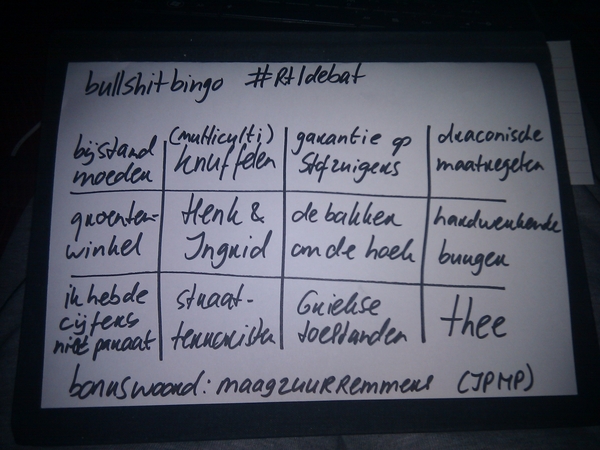 My picture ended up on tv in a short segment on the election debate:1